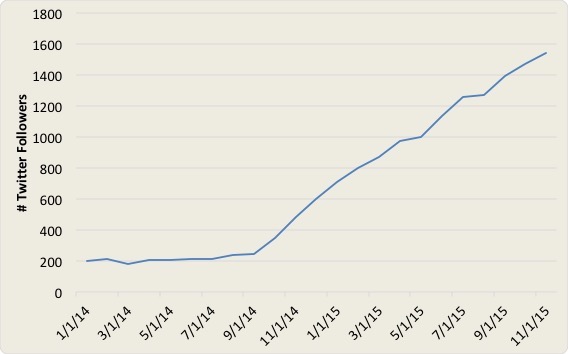 periscopeUP was hired in early 2014 to help a regional branding agency amplify its content and build awareness. Our first task was to work with the agency’s internal team to set-up a content calendar and fine-tune the content generation process. Next, we set-up a consistent schedule for social media posting that included company blog posts as well as carefully curated industry content.

We began actively growing the company’s Twitter followers by identifying and following several influencers within the space as well as profiles that matched target persona criteria. Over time, a large percentage of the followed profiles followed back, engaged with and amplified the content. We identified highly shared content within the space and worked with the client to develop similar articles with a unique spin and when possible to interview the original author and then develop a blog post around the exchange.

The content creation and amplification resulted in a steady increase in sessions (with improved time on site and bounce rate) to the blog section of the website. The increase in blog sessions signaled greater engagement to the Search Engines, resulting in higher rankings and impressions for keywords relevant to the articles, which then translated to gains in organic sessions.

The positive results shown in the graphs above illustrate the consistent increases in Twitter followers, blog sessions, and overall organic sessions over the same timeframe. The first graph shows the increase in blog sessions (in orange) and the corresponding increases in organic sessions. This second graph shows a dramatic increase in Twitter followers in 2014 and 2015. Social media marketing can be a very effective means for building engagement and growing a brand.